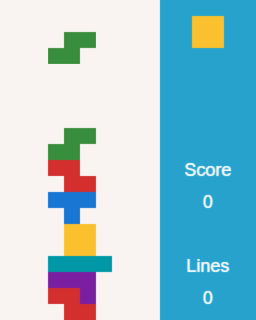 “A language a year keeps the doc away!”

Don’t be fooled by the name TypeTris. There is no actual typing involved.

As promised in the Duotris PoC here it is. A cleaner version of JavaScript Tetris in 1.5 KB.

The source code contains a few classes and ~ 330 lines of code. So if you are familiar with TypeScript or Tetris you can easily read along and learn one or the other.

Then open typetris.html in your browser.

A word about browser compatibility

This project use the TypeScript compiler to transpile TypeScript → ES6. So it works in current browsers:

Internet Explorer is not a target (well, not in that way).

I used tslint though with some rules to my liking (see tslint.json), I would like to hear from you about how to do things in an idiomatic way.

Except TypeScript’s type system there is much more but I hesitated to use mixins, decorators, modules, etc. but show me if you know good use for them.

Rendering is implemented by adhering to IRenderer which has only two methods (draw and score). A default renderer CanvasRenderer is provided, but you can implement your own (e.g. DOMTableRenderer, WebGLRenderer or ASCIIRenderer) by implementing those two methods.